Looking for speakers that create quality sounds without taking a major hit to your wallet? After much trial and error, I discovered the Vava Voom 21 Bluetooth speakers. From its design, build, features and overall sound quality, it is one of the best speakers in its price range.

Purchased before a major camping trip, I never thought this speaker would sustain its battery life for as long as it did. For several hours, my friends and I filled our campsite with the sounds of Jay-Z and Janelle Monae.

While most likely a confusing spectacle to the wildlife surrounding us, it felt as though we were at a mini concert. 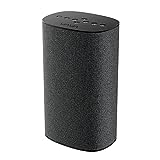 The Vava Voom 21 is an exceptionally powerful and sleekly built portable Bluetooth speaker that produces clear, crisp sounds that will fill any room. Sold only on Amazon or from Vava's website, the Vava Voom 21 speaker isn't technically a 360-degree device, yet still produces bright sounds from the front and back.

With the purchase of any electronic device, one of the biggest concerns is battery life. For the obsessed music lover, the battery life lasts for up to 10 hours. This means you can have a dance party in your home from sunrise to sunset.

Adorned with a subwoofer for extra bass and high powered acoustic drivers, to deliver crisp and smooth sounds, this speaker can transport you from a rock concert to an easy night at a jazz lounge.

The ease with which this speaker connects to Bluetooth is something to behold. Owners can connect up to two devices at once. Shifting back and forth between devices is only a matter of discontinuing music from one device to connect to the other.

A great feature of this speaker, (especially for those who always seem to lose their chargers) is the power bank. Could you imagine being in the woods when suddenly, your phone's power bar turns red? Instead of this scenario potentially turning your outdoor party into a dud, the Vava Voom 21 can juice up your phone thanks to the built-in 5V/1A charging port.

The Vava Voom 21 features a 10W subwoofer (which adds an extra kick to your favorite songs), two passive radiators and two 5W drivers. At the top of the speaker is where all the controls live. The power button features different LED indicators lights which show how much battery life your speaker has.

An EQ button offers three options (standard, party, and surround) to match any mood or occasion. Standard mode provides a very balanced and overall pleasant sound to all songs. I would describe it as a brisk walk in the park while the sun beams on your face. Party mode is for occasions where you want to let loose as the bass is more pronounced and has more grit to it. Surround mode is for those moments when you want to feel as if you were in the studio when a song was being recorded.

Sitting a few feet away from the speaker, it can feel as though you are having a private concert in your living room.

The Vava Voom 21 supports wireless streaming and can be simultaneously connected to two devices. Though only one device is playable at a time, the other device can sit on standby. Also due to its wireless capabilities, it means that owners can use WIFI to stream their favorite music.

To further show how incredible these speakers are, we have compared the Vava Voom 21 to three similar Bluetooth and portable speakers: the JBL Charge 3
the Fugoo Style and the Bose Soundlink Mini II.

If you're looking for a speaker that might survive the next zombie apocalypse, look no further than the JBL Charge 3. A successor to the very popular JBL Charge 2, the JBL Charge 3 kept the wonderful features of its predecessor while adding improvements.

With a waterproof design and IPX7 certification, any owner will never have to worry about taking this speaker to a pool party or the beach. Featuring a built-in rechargeable Li-on battery, the JBL Charge 3 not only supports up to 20 hours of play time but also can simultaneously charge, while music is playing. Its USB port means that it can also charge smartphones and tablets.

Due to the noise and echo-canceling speakerphone, its easy connection capabilities allow for crystal clear calls from your speaker with the touch of a button. Using the JBL connect app you can wirelessly link your speaker to other JBL Connect enabled speakers to amplify the sound and widen your soundstage. You could have 3 or 4 speakers playing the same song and recreate a surround sound experience. 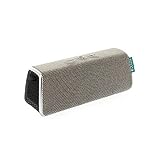 Sometimes described as the best-kept secret in the Bluetooth speaker market, the Fugoo carries with it some great features. The Fugoo comes in your choice of jacket style (Style, Tough, or Sport) and regardless of choice, this speaker is well equipped to face the elements.

Despite its small stature, this speaker offers up to 40 hours of battery life. You could watch all the Lord of the Rings and Harry Potter films in that time and still have a few hours to question why you did that. Also featuring a wireless range of 30 plus feet, you could place your speaker at one end of a building while still being able to control the song that is being played.

Impeccably designed, the Fugoo's core features a tough, IP67- protected interior. This interior comes together to offer a shockproof, waterproof and dustproof speaker. Unlike the JBL Charge 3, the Fugoo's woofer is not exposed, but instead, it's capped by a protective layer to avoid the possibility of sound distortions. The Fugoo also features six drivers on four sides which create an immersive 360-degree sweet spot and an 85db SPL-A volume, with a built-in microphone to take calls while outdoors.

Connecting to the Fugoo Bluetooth speaker is incredibly simple: just tap and hold the Bluetooth button and search for the icon on your device. The Fugoo even has helpful voice prompts which help the process move even more smoothly.

The Fugoo Bluetooth speaker offers voice support for Siri, Google Now and phone calls. Its internal microphone does not encounter any problems when picking up multiple voices in a room. The speaker can also play through voice messages with minimal distortion.

Although it was released in the long-ago universe of 2015, the Bose Soundlink Mini II should not be written off just yet. With a battery life of up to 10 hours and a wireless range of around 30 feet, this speaker punches above its weight class.

From its impressive design, it is easy to see that the Bose Soundlink Mini II is built like a brick house yet the speakers still produce sounds that will make your ears sing.

Although it lacks several features of the previously mentioned speakers, the sound quality of the Bose Soundlink Mini II remains one of the best out there. While many other compact wireless speakers struggle to output quality bass, the Soundlink Mini II has avoided that issue completely. Even against heavy and pulsating rock songs, these speakers play without distortion.

In terms of high-frequency noises, the Bose Soundlink Mini II has also shone. The higher sounds are clear and energetic and do not overwhelm the listener. The Mini II also has the ability to separate instruments in a song so that music lovers can appreciate every single rhythm.

On top of the speaker, you will find all controls including power, volume manipulations, and a multi-function button. The multi-function button can be used to change tracks or for the activation of voice assistants like Siri. The speaker also contains a small yet powerful microphone which makes taking calls a cinch.

As someone who is considered critical, I was not expecting the Vava Voom 21 to be as incredible as it was, considering its price. The Vava Voom 21 is one of the best-hidden gems out there due to its fantastic price, superb design and sound quality. Although some may find the EQ settings to be a little tricky, in my experience, I loved the ability to change the sound quality from either standard, party or surround mode.

My favorite aspect of this speaker was the soft touch plastic bottom which has the same effect as a suction cup. As parties or even small gatherings can become a little rowdy, it is nice knowing that you can place your speaker in a spot and that it will not shift. Its sleek design is something else that I really appreciated as it did not seem very impressive when I first opened the box. As they often say, don't judge a book by its cover and the Vava Voom 21 pages were filled with beautiful melodies.

Considering that many people use Bluetooth speakers in environments where water is present, make sure to purchase water-resistant protection. It will help your speaker last much longer which means more crazy beach parties.

While the sound quality is great, it would have been the perfect speaker if they added a water-resistant coat to its design.