The brand Edifier is less known in the United States than it is globally.  However, they have a h0istory that reaches back to the mid 90’s.  Although the company is relatively small, they produce about eight million various electronic units a year that are distributed to over 70 countries globally. The S2000 Pro is a demonstration of Edifier’s commitment to creating superior electronics.

The S2000 is constructed thoughtfully.  Its thick, natural birch side panels and high-quality finishes are just the surfaces of the speaker's offerings. The units have four On-Board EQ settings meant to allow the listener a professional sound experience unaffected by either balanced or unbalanced connections.
There is a lot of excitement and hype surrounding these studio monitors, and they can be hard to find, and they sell out quickly.

In this review, we will see if the S2000 Pro stands up to the hype.  We will be looking at the speaker's specs, appearance, sound quality and other relevant features. We also will compare them to three other monitors, rating them all based on ease of use, assembly time, design quality, and their warranties. 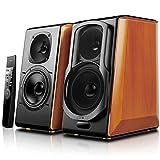 The Edifier S2000 Pro is 8" in x 13.5" in x 10.5" in (WxHxD) and has two genuine birch sideboards per speaker.  The outside is deceiving because they look inconspicuous.  You would never guess they are stuffed with a surprisingly large amount of cutting-edge technologies.  Yet, they are.  The speakers use a low-distortion flat diaphragm similar to a planar tweeter.  The woofer is only 5.5" and made of a black anodized aluminum cone.  A KLIPPEL precise analysis system allows the cone woofer to take advantage of the DSP digital electronic crossover.   The cone is sturdy on all points, and its suspension is stiff and sufficiently damped.

The right speaker connection options are well thought out.  There are unbalanced RCA and balanced XLR analog inputs.  Although the control speaker lacks an HDMI cable, it does have a Toslink digital input, making the speakers ideal for replacing soundbars on HDTV displays.  There is also a coax cable input.
Other than connections, along the back panel of the master speaker, the bass, treble and volume dials are found.  While there is a power switch, it has to remain on at all times in order for the remote to be used for power control.  All the functions are digitally controlled and linked to the DSP.

The units have a fourth order enclosure a bass reflex design with a flared port two inches in diameter.  As mentioned before, the S2000 is outfitted with aptX Bluetooth 4.1, which simply means the Bluetooth connection should be nearly flawless.  All that majesty sits atop four brass feet with rubber padding that stabilizes the speakers as well as minimizes resonance transfer.

That is only a taste of how well the internal layout of the speakers has been engineered; they only get better the more you pick them apart.    In fact, there are only a couple of flaws we could find with the design.  Frist, the connection cable is a bit excessive in length. Second, the remote seems as if it does not belong with the set.  It is much large than even remotely required, no pun intended.  You would think there were a host of functions on such a large apparatus, but no, it only controls the EQ selection, power, volume and playback controls.   What is surprising is that it is so large Edifier could have easily included a way to control the bass and treble, but didn't.

Actually, there is one more flaw we could find.  The users manual is minimalistic to a fault.  The fact the 4 EQ positions impact everything, but the balance was completely left out of the manual.  It would have been nice to have that information up front.  However having picked apart those issues, we must admit it was hard to find flaws with these monitors.  They sound as good as they look.

We picked three similar speakers available on the market to see how they compare to the Edifier S2000.  As mentioned before, we will be rating the speakers on a set of criteria including their ease of use, assembly time, and design quality.  We will give brief specs for our comparison models as well as pros and cons of the systems.

This group of comparison speakers has some surprising results, including one speaker that may prove specs only go as far as design quality, and one can negate the other.  Also, some of our comparison models are sold individually, but we have reviewed them all in pairs to keep things consistent, all pricing reflects the purchase of two speakers.

For producers, coloring issues mean your mixes may not translate to other sources the way you hear them on the monitors. The materials used range from sturdy to rather cheap, and there does not seem to be cohesion to design choices.  The also units have an unnecessarily large footprint, 16.5 in x 10 in x 12.1 in. Pricing is all over the place, so choose the vendor you purchase from carefully. 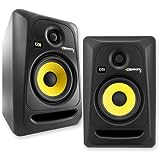 All that said, there are a few things we like less.  The remote is nice to have, but it is larger than necessary and very pointed.  It also does not have the ability to address functions such as bass and treble, which means you have to go to the master unit every time they need adjustment.  For casual use, more standard TV soundbars would be better for anyone who does not have state-of-the-art TV components as HDMI is not a hookup option.  There is also no output for a subwoofer.  Overall we give the S2000 Pro a 4.5 rating since we had to nitpick just to find those few flaws.