Speakers are for hustlers. I’m talking about those of us who are putting in work every day. That goes for consumers willing to throw down the cash for quality, and it definitely goes for companies that design and build devices like the Braven 570. Unless you can step up and deliver a product with style and flair, you’re going to get left in the dirt.

There are some incredible quality speakers for those with the disposable income to spend big. Instead, we’re taking a look at the Braven 570 and seeing whether it can stand up against some of its leading competitors. So does this plucky little rectangle make the grade? Read on and find out.

Some prefer the rounded pill-shaped design of the JBL Flip 4 over the Braven 570’s boxy design. Fair enough. Personally, I like the straight-edged look. Since mine is jet black, I imagine that it’s the obelisk from 2001: A Space Odyssey. By the way, I watched the film on my iPhone recently, and the sound quality really does the orchestral pieces justice.

When I wanted to test the sound quality, the first thing I did was compare it in different environments. Inside with minimal noise interference: sounds crisp and clear. I’m not trying to go deaf (I need my ears for more reviews) so I keep the music volume at a reasonable level, and the Braven 570 was more than capable of delivering quality sound.

However, it was harder to hear when I took it in the backyard. This is a portable device that’s really intended for personal use. So if you’re planning a big bash and are expecting that the Braven 570 is going to compete with the noise of your party, you’ll probably want to reconsider.

If you’re shopping for Bluetooth speakers, you don’t want ones that are going to tether you to the wall, which is why battery life is so important. We’ve all had those devices that work great but suck up a ton of battery life. To get a complete charge out of your Braven 570, the manufacturer recommends allowing at least two hours and as many as four.

That’s not great news for someone who just wants to grab it and go. But consider this: you can plug your phone into your speakers to charge them. Even when I’ve got my speakers with me all day, my iPhone is the biggest energy hog hands down. That’s why I plan for my Braven 570 to work as a backup in case I need one. Camping trips? Yep, this is definitely an accessory you’ll want.

The Braven 570 is available in a range of colors so you can get the one you want. I went with the black, but I almost went with purple instead. You can also choose white, green, red or blue. It’s also got a USB port which is something that plenty of other competitors can’t match.

It’s got a range of 33 feet which means you’ve got some latitude between your phone and whatever device the speaker is paired with. I personally didn’t notice that the connection was spotty, and I could walk around the room without having to think about connection issues.

If you want, you can connect your Braven 570 to other speakers for extra power, like a daisy chain. You might not consider this necessary, but I like that it’s available as an option. If you want a more powerful sound that will carry, this is definitely a plus.

In addition to playing music, you can also use the speakers for voice calls. This is especially convenient if you like making long phone calls but don’t want to hold the phone up to your ear for hours on end or make due by plugging in earbuds or headphones. The sound quality is better than the phone alone, and there’s a noise-canceling microphone, so your voice comes sounds clear too.

If you do a side-by-side comparison of the Braven 570 and the Braven 600, you’ll find that the 570 is more than capable of stacking up. They’ve got the same maximum volume, the same wireless capability, and the same audio output. The Braven 570 is 28 grams lighter, but the Braven 600 has a slightly more powerful battery. It’s a roughly 16% difference, which you may or may not notice.

Maybe the biggest difference is that the Braven 600 has a 3.5 mm audio jack and the 570 doesn’t. The 600 also comes with a carrying bag included. 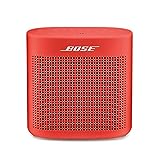 What I like about the Bose SoundLink Micro is that is lives up to its name; it’s really tiny. Any decent portable Bluetooth speaker out there is going to be easy to take with you, but this is the only one I know that can (comfortably) fit in my pocket.

I’d call its style understated. By that, I mean that its description doesn’t necessarily call to mind words like “sleek,” but you might instead call it “cute,” which isn’t bad either.

The price point means that it can compete with the Braven 570 and the JBL Flip 4, which are both roughly comparable.

Regarding sound quality, it had a lot of the same problems I’ve experienced with similar speakers. Yes, the quality is great on some songs, especially those with low bass, but you’re not going to get the clean distortion-free sound you want on those with lots of heavy, bumping’ beats.

The first thing that’s likely to grab you about the Tribit XSound Go is the price. It’s hands down the cheapest Bluetooth speaker of the models in this review. But there’s more going on here than just the sticker price.

For four hours of charge, the manufacturer claims a full 24 hours of music play time. That’s a pretty huge advantage when you consider that battery life is one of the main things many consumers look for.

Of course, you’re probably wondering about how the quality compares to other models. You’re not going to be blown away by the quality of the sound. To keep the price so low, corners have to be cut somewhere. It’s not going to sound like your music is being played out of a rusty tin can by any means; it’s perfectly decent. But if your priority is strong bass, you’ll probably be left wanting.

That’s not to say that you can’t enjoy the experience of listening. It does a lot for the price. And, just like the JBL Flip 4, you can take it in the shower with you because it’s waterproof. However, it offers a scant 30-day warranty while competitors like the JBL Flip 4 are good for one year.

The JBL Flip 4 makes a statement immediately if you’ve ever seen it held under a faucet in those promotional pictures. This is definitely a neat feature, and the ad boasts that it’s fully waterproof. That means that it won’t just survive a spill if you knock over a glass, it can survive being fully submerged in water, which means you’ll have accompanying music when you're singing in the shower.

JBL clearly wanted to step up from the Flip 3 by delivering more inside, and that’s literally what they did. It’s heavier than the previous model, and it’s got a stronger, longer battery life. The JBL Flip 4 manages to undercut the Braven 570 on price though not by much as the price points are pretty close together.

If bass is your priority, then other speakers can probably curb your craving better than the Flip 4, though the external passive radiators helped with this. I found from listening that I loved the sound of some songs but was straining to listen for certain instruments on others. While the manufacturer claims that it runs for 12 hours on a single charge, I found it was less if I kept the volume high for hours. You might find that it lasts longer if you keep the volume lower.

Overall, I’m a fan of the Braven 570, but I’d be hard-pressed to call it the leader in its category. It could stand to be a little cheaper to match the cost of some of its closest competitors. The sound quality is undeniably solid but not unparalleled. The JBL Flip 4 and the Bose SoundLink Micro have a lot of the same strengths and shortcomings.

If color coordinating it with your room or another device is a priority, then you’ll be happy to have more options than you have with the Tribit XSound Go. I’m all for freedom of choice, and I like the way the finish on the casing looks as well. I also noticed that it doesn’t collect fingerprints which means you don’t need to rub it down constantly just to keep it clean.

Since I didn’t hear mention of the Braven 570 being submersible in water, I didn’t test this feature for myself, and I recommend that you don’t either. Does it matter? Honestly, it depends on how you plan to use it. If the shower is where you plan to use your Bluetooth speakers, then these probably aren’t the speakers for you. But if your device is going to spend most of its time on your desk, it shouldn’t be an issue.